FOR SALE BY SCAN AUTOMOTIVE 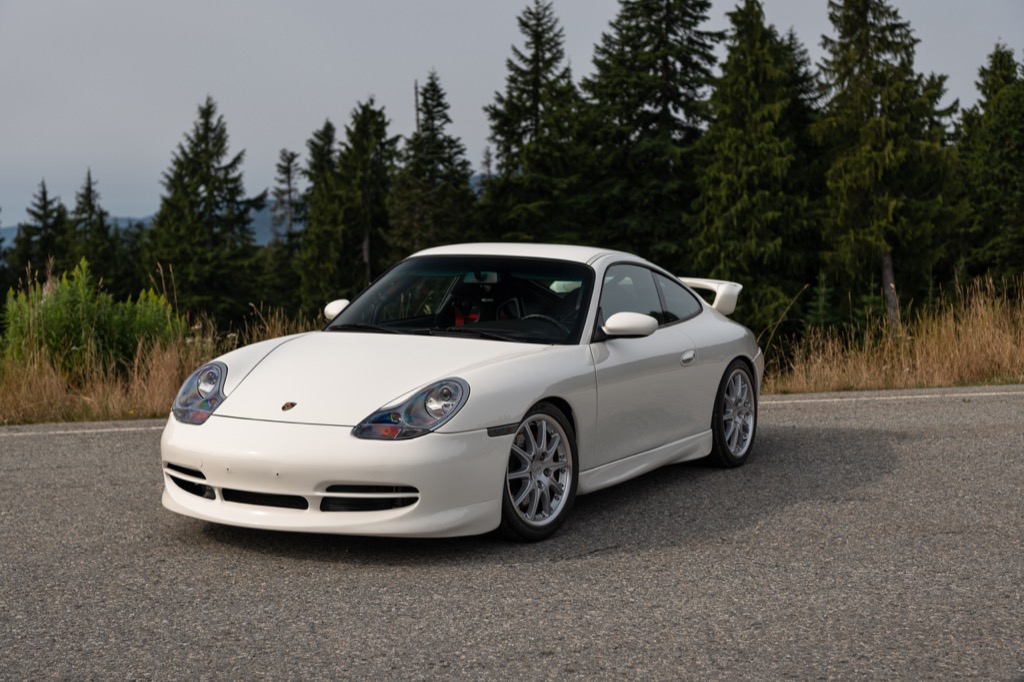 This is a genuine rarity and something utterly special coming out of our in-house collection. The original GT3.

When Porsche entered the water-cooled 911 era, they still had to build a race car for the road to homologate the race car program and to continue the successes of the 964 and 993 Cup race series. The GT3 was the evolution of the RS-series program, and a gigantic success it has become. The road-going versions of these earliest examples were rare, as was the case with the previous generations, and featured many of the parts that were used in the Cup series race cars. These cars were actually built in the Porsche Motorsport department alongside the Cup cars, and were the last to be constructed in this fashion. They were very similar to the Cup mechanically, and in Clubsport trim, such as this car, essentially the same as having a Cup road registered, fitted with softer engine mounts and some carpets. Never offered to the North American market, as was the case with almost all of Porsche’s previous tasty RS cars, we could only look on in desire as the rest of the world got to get all the truly great 996’s.

Finished in Biarritz White, as were the Cup’s of the time, and specified with all of the right options by it’s obviously brilliant first owner, this car is an extraordinarily well-preserved example. Not only was it the right colour for a GT3, but it featured the host of Clubsport options which were a la carte at the time. The cage installed included the front and rear sections and the very rarely seen side bars. The car has the battery disconnects inside and outside, the fire extinguisher and the perlon seats with the original Schroth harnesses fitted. The road-going concessions came in the form of air conditioning (really, a very nice feature to have), Litronic headlamps (a massive improvement over the standard halogen headlamps for night driving) and a radio (which we thought was pointless, so we removed the head unit, although one could be fitted easily if desired, including the Porsche Classic unit). Finding this combination is extremely rare in a car that was already a scarce commodity.

We simply couldn’t help ourselves when we had the opportunity to purchase it a few years ago needing a long list of servicing and some caring attention by a true GT-car enthusiast. The car was thoroughly examined, and an extensive service was performed with no expense spared. The engine and transaxle were removed, all of the hoses on the engine were replaced, the coolant lines were pinned, new water pump fitted, cam covers removed for inspection of the camshafts and timing chain guides, new timing chain tensioners fitted, and a litany of other items. The original differential was removed and disassembled, then re-fitted with Guard 40/60 ramps and their GT3 differential internals. The tired original shock absorbers were replaced with an Ohlins Road & Track kit and the rear toe links were replaced with the units from the GT3 Cup and some H&R wheel spacers were fitted to fill out the arches. The headlamps were replaced with brand new LHD versions, as this car was originally delivered to an owner in Japan and consequently fitted with RHD headlamps from new. New Bridgestone tires were fitted and all fluids were changed. The equivalent of over $60K worth of loving care was spent making this car the best it can be. All of the major original parts have been retained to be included with the car should someone desire to keep it completely original, but we prefer the subtly improved feel of this car in it’s current state. The underside of the vehicle has been cleaned and inspected, where no damage has been observed, or prior accident history evident. Whilst many of these cars were used in competition, this one was evidently driven by a sensible owner, and kept very well. It has suffered no collisions of consequence in it’s near 20 years on this planet, and despite covering 97K Km. All original manufacturer decals and tags are in place and verified. The car has it’s original engine and transmission as well. Porsche Certificate of Authenticity is included.

It’s our opinion that rarities of this sort from the modern Porsche 911 era have significant investment upside potential while featuring a special and unique driving experience. A 993 RS Clubsport is well past a $500K USD proposition at this point, and they aren’t making any more of those either!

Viewings are available by appointment.

A dealer documentation fee of $495 applies in addition to the purchase price.